Conservative Anabaptists have deep and abiding differences with both Protestant and Catholic conceptions of what authentic Christianity looks like.

The question has been raised about how Protestant and Catholic beliefs compare to conservative Anabaptists and this caught my interest enough that I decided to try to plot differences. I thought this could be helpful for several reasons:

[Note: The chart below is a guide and a work in progress and I would really welcome your input & corrections. (One thing that would really help is any glaringly missing major Protestant theological points that would be in agreement with conservative Anabaptists) It is has obvious generalizations for simplicity’s sake and some are judgment calls. Also, at the moment the list is a quite a will nilly order.] 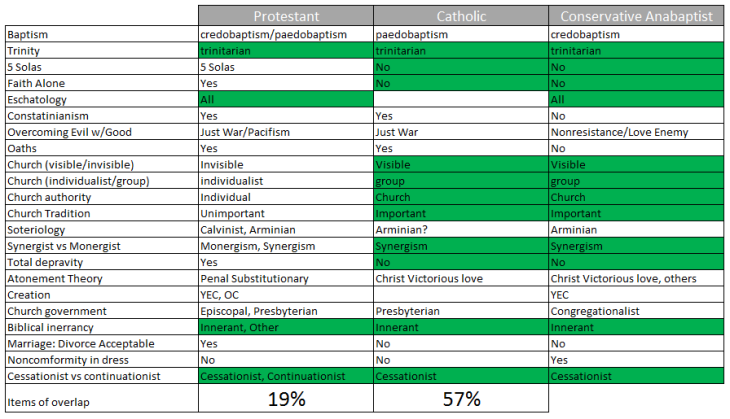 Note: A bit more nuance on “Faith Alone”: Anabaptists believe in salvation through faith in Christ and maintain the NT emphasis of both Jesus, Paul & others on the importance of repentence and walking in newness of life. A classic formulation of Anabaptist thinking on faith & salvation is found in the Dordrecht Confession article IV on “Of Repentence & Newness of Life“.

Hopefully this is helpful in living in the truth.